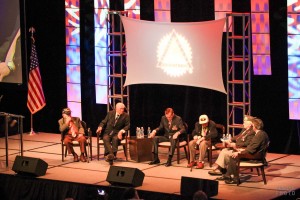 A panel of distinguished World War II veterans made a moving presentation to 500 attendees of the 2016 National Notary Association conference at the Hyatt in Anaheim, California recently. Coordinated through The Greatest Generations Foundation, the presentation was captivating. It was an honor to have photographed the men as they recounted some of their war time experiences. This photography article presents some of my favorites photos of the World War II veterans and explains a little about the event.

The veterans presenting today included Mr. Paul Du Pre (age 92), Dr. Earl Bruce Hellman (age 90), Mr. Jack Holder (age 94),  Mr. Joseph Reilly (age 94), and Mr. Jack Foy. It was an honor to photograph these five gentleman of history as part of the NNA’s 2016 conference photography at the Hyatt Regency Orange County California. And I would imagine that each of the 500 attendees also felt privileged to have attended this opening session.

Though my cameras could not capture the words each of the gentleman spoke, I could photograph some of the expression in the faces and eyes, and even the expressive movements of the World War II veterans as they recounted aspects of their experiences during this critical time in history.

Mr. Reilly stood while told the audience about some of his experiences as a paratrooper with the 101st Airborne Division, even jumping into the D-Day invasion. Mr. Du Pre was a medic in the 114th General Hospital Unit in Kidderminster, England during the WWII. Dr. Hellman was in the Okinawa during the suicide raids on the fleet and defended against attacking Japanese bombers. Mr. Holder was at Ford Island when the first bomb was dropped in the attack on Pearl Harbor.

During the presentations I photographed each veteran from a variety of perspectives using wide, normal and telephotos lenses. I also varied my photography position, too. As I would do through the entire conference, I photographed from in front of the stage, beside the stage, from the back of the room, and even from several balconies which overlooked the ballroom. In all a nice collection of photos, each edited to ensure best appearance, were created of veterans’ presentation at the NNA conference. 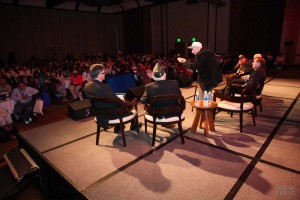 The NNA coordinated the veteran’s appearance with The Greatest Generations Foundation, a charity based in Denver, Colorado. Although TGGF honors our nation’s veterans in several capacities, its battlefield programs are among its most distinguishable initiatives. These programs help veterans return to the location(s) in which they served at no cost to them. The goal is to raise awareness of the selfless courage all World War II veterans exercised when they were called to duty so future generations will never forget their sacrifices and, more importantly, those who were left behind.

The NNA 2016 conference attendees gave a standing ovation to the four veterans for their presentations, for their service, and for their valor, and for what they did help end World War II. A number of attendees were brought to tears as they thought about the words each man spoke, and what it must have been like during those days, and for what it might be like in any war. I am honored to have photographed these fine gentleman and to present some of my favorites photos which I shot during their presentation.

Mr. Peter Du Pre  Age: 92 | U.S. General Hospital. Technician Fifth Grade Peter B. Du Pre served as a medic in the 114th General Hospital Unit in Kidderminster, England during WWII. At age 17, both of his parents had already died, making him the acting patriarch of a five-person family. Within a year, his sister had joined the war effort as a nurse, one brother had joined the Army Air Forces, one had joined the Marines and Peter had enlisted in the Army. He served for three years overseas during which time he treated wounded servicemen from all areas of Europe, including those who had been wounded during the Battle of the Bulge.

Dr. Earl Bruce Hellman Age: 90 | U.S. Marine Corps. Hellman arrived in Okinawa during suicide bombing raids on the fleet. His outfit took over Chimu Field, an airstrip that helped sustain the bombing of Japan, defend against attacking Japanese bombers, and protect the base from the enemy. He later served for six months on occupation duty in Japan flying as a radio operator on staff of the Commander of the Fifth Fleet, taking intelligence persons to Hiroshima, Nagasaki, and other sites in the Pacific, and transporting the wounded and supplies to service the occupation troops.

Mr. Jack Holder Age: 94 | Ford Island. On the morning of Dec. 7, 1941, Jack Holder assembled for a muster and heard a loud crash. It was the first bomb dropped on Ford Island, which initiated the Japanese attacks on Pearl Harbor. As Jack looked to the sky, he saw it filled with Japanese bombers, identified by the rising sun insignia. “There’s always a moment of fear, but you can’t let that bother you, you got to get involved. Once the adrenaline starts to flow it becomes a game, a game you desperately want to win,” Holder said.

Mr. Joseph Reilly Age: 94 | U.S. Army. He served as a paratrooper with the 101st Airborne Division and jumped into the D-Day invasion to free Europe from Nazi occupation on June 6, 1944. Reilly’s first battle jump with the Screaming Eagles came in the first hours of the invasion when he hit the ground behind the Normandy beaches. He went on to jump into Holland, fought in the Battle of the Bulge and in the central European pocket. 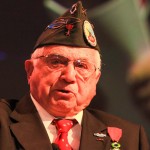 Mr. Jack Foy | 347th Infantry. “The trees are splintering and crashing down around you, and there’s not a damn thing you can do about it but hug the ground and pray,” recalled Foy, who served as an infantry machine gunner in George Patton’s Third Army. “It can become awfully vicious to have your friends blow up right alongside of you. “It doesn’t hit me as often as it used to, but it does hit me.” Source: Democrat and Chronicle

More About The Greatest Generations Foundation

Over the last 12 years, TGGF has conducted over 100 programs and has returned more than 3,000 World War II veterans to the battlegrounds on which they fought. These destinations include journeys to Pearl Harbor, Normandy, Europe, North Africa, Iwo Jima, and to battlefields throughout the Pacific including Guam, Saipan, Tinian, Tarawa and Okinawa to name a few. While these voyages are often emotional, they provide veterans a measure of closure from their war experiences, a venue to educate others, and the opportunity to experience the gratitude we have for their service.