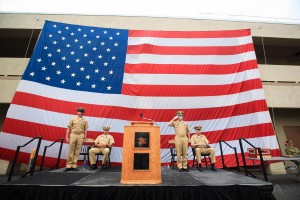 It was a true honor for me to have photographed this U.S. Navy SEAL retirement ceremony, and it was a personal, heartfelt event to photograph because this particular SEAL is my very best friend of over 20 years. For over 25 years Scott, and indeed his family, have served our country as a Special Warfare Operator (SEAL) and on this day nearly 100 people gathered to pay him special respect.

Surrounded by his family, fellow SEALs, and friends, and in uniform with his rank of Chief, Scott’s U.S .Navy SEAL retirement ceremony was patriotic, celebratory, and tearful. Speakers spoke highly and eloquently about Scott recounting some of his accomplishments as a Special Warfare Operator. 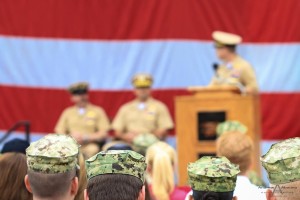 The Commander who was Scott’s guest speaker also reminded us of something even more significant. You see, it was a decade earlier that Scott was engaged in war, a war against cancer, an enemy that tried to take his life. With his wife and family always by his side, and with his humble strength, dignity and honor, Scott prevailed in that war.

Overcoming and even accommodating the collateral damage that came with battle and victory against the invading cancer, proved that along with all of his many professional accomplishments this was no ordinary U.S. Navy SEAL retirement. Scott is no ordinary man. It isn’t just because of his renowned training and stature as a SEAL, nor just his kindness and interest in others, nor only his incredible will that makes him the unique person that he is. All told, it is Scott’s family, who are his most important team mates. Is was all these elements and for a 25-year Navy and SEAL career that were rightfully honored on this day.

After the Commander spoke about Scott’s determination and ability to lead and motivate fellow SEAL Operators on grueling tasks, some of whom were a decade or two younger, Scott was presented with prestigious awards. This was followed by the CPO Retirement Creed then the Old Glory Reading as the U.S. Flag was ceremoniously handed to Scott, who in turn handed it to his wife.

Next, the audience listened intently as Scott made his farewell remarks. The words he spoke of about his family and his career brought tears of joy to many eyes, and we all felt so honored to be present on this day and to know Scott. Following his comments, Scott was presented with a wonderful, hand-made showcase filled with SEAL mementos, including his BUD/s helmet. The helmet was especially fitting because it was at this precise spot, 25 years earlier, where Scott graduated BUD/s (SEAL training). 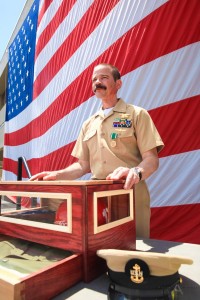 Following the Benediction, Scott’s U.S. Navy SEAL retirement ceremony closed with a reading of The Watch, then Scott was piped ashore, which he repeated one final time with his wife by his side, and his family, too. All of us at Scott’s Navy SEAL retirement ceremony, including his family, team mates, friends, and indeed his country for whom he helped protect and serve for a quarter century, were so humbled and proud, just as I am to call Scott my best friend.

For more information about event photography or military photography, please contact me.